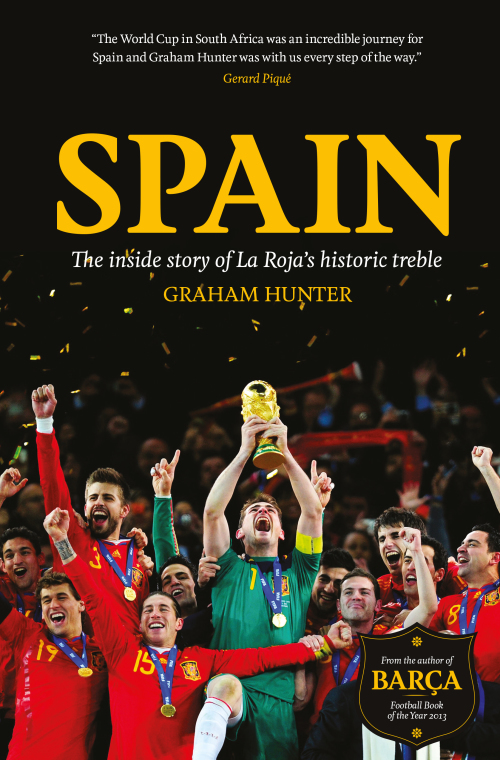 “ The World Cup in South Africa was an incredible journey and Graham Hunter was with us every step of the way. – Gerard Pique

This is the story of the greatest achievement in the history of international football. After decades of failure, Spain won the European Championship in 2008 and then the World Cup in 2010. At Euro 2012 they became the first team to win three consecutive tournament titles.

Graham Hunter was inside the dressing room as the players celebrated after the finals of the World Cup and Euro 2012. His access-all-areas pass at all three tournaments has resulted in remarkable eyewitness accounts and new interviews with star players and the men behind the scenes.

Across every day of La Roja s treble, the author takes you on to the training ground; on the team bus; into the canteen; inside the hotels and on to the pitch. You ll hear the team talks that inspired Spain to victory plus the inside stories from Fernando Torres, Xavi, Iker Casillas, David Villa, Cesc Fàbregas, Andrés Iniesta, Gerard Piqué and the others behind an unprecedented era.

“ The World Cup in South Africa was an incredible journey and Graham Hunter was with us every step of the way.– Gerard Pique
“ Having been part of La Roja's inner circle since 2008, Hunter provides superb insight into how, in the words of Casillas, they have 'made something difficult appear normal'. Packed with interviews, above all else it serves as a stark reminder of how tough it'll be for the brilliant but ageing squad next year. ****– Four Four Two
“ Graham Hunter’s fine new book is full of details and memories best gathered by an embedded, Spanish-speaking reporter. What Hunter captures best is the camaraderie among this gifted bunch of players.– Sam Wallace, The Independent
“ Graham Hunter's Spain is a typically boisterous, entertaining account of how the national team rose from the burden of heavy criticism to being the best in the world. Hunter's access - first revealed in his award-winning Barca - is astounding. This is a book that carries the atmosphere and secrets of the Spanish dressing-room to the wider world.– The Herald
“ Hunter has rubbed shoulders with stars such as Ronaldinho and Lionel Messi, but has become closest with the Spanish players – and he has used that unique access to tell the inside story of how Spain won the World Cup and last two Euros. A fascinating read.– The Daily Record
“ Graham Hunter, who has been enthralled with Spanish football and culture since trucking 2,000 miles from Aberdeen to follow the 1982 World Cup in Spain, has followed up his award-winning book on the making of Barça’s wonder team with a provocative account of what makes Spain’s invincible team tick. Part of it stems from Aragonés’s charismatic leadership and the collegiate management style of his successor, Vicente del Bosque, but much, too, comes from the country’s nurturing of its underage talent.– The Irish News

The Big Interview at the World Cup! The Big Interview Presents: Spain – English Lessons Win A Copy Of Spain: The Inside Story Of La Roja’s Historic Treble Spain v Italy: How the Golden Age Began Spain paperback out!