Welcome to our Big Interview Icons series, where we shine a light on a legend whose name has lit up some of the conversations I’ve had with my guests over the last five years of The Big Interview. First up is Eric Cantona.

How to describe Eric… a Harley-Davidson-riding, collar-turned-up, French rebel genius. He was a totem for an era of fellow magicians and mavericks in England’s top division.

Simon Stainrod played against King Eric in France and predicted that Leeds boss Howard Wilkinson wouldn’t like him, and that Eric would be better off playing for someone like Alex Ferguson. ‘You can’t coach him… you can only put ideas in his head,’ concludes Simon. Chris Waddle played alongside Eric at Marseille and believes he flourished when he moved across the Channel because English fans love a rule-breaker, someone unpredictable. We then hear from Gary McAllister and Gordon Strachan who speak about Eric’s spell at Leeds. Gary says that he wasn’t integral to the club’s 1992 league title win. Gordon takes a different view, that Eric made the difference as the other players started to tire. Gordon, like Simon Stainrod, saw Manchester United as Eric’s perfect fit. 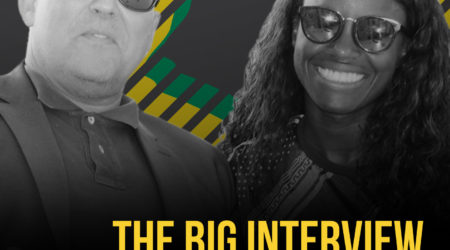